What Would Dr. King Do?

Feb 2 / Karith Foster
Like the way of most of our New Year’s resolutions (if we dared to make any this year given 2021 and 2020’s track record for making “dry-January” nigh impossible), so has gone our tributes and pledges of keeping Dr. King’s spirit and mission alive.
Sidenote: If you had to think about which Dr. King I am referring to:

a) You definitely need to be reading this
b) It’s the Sermon on the Mount, March on Washington, “I Have a Dream” Dr. King whose birthday was around two weeks ago.
My goal is not to shame or riddle you with guilt if on January 17th, now also a national holiday, you were one of the millions who took to social media to post a quote or video clip of the late great civil rights hero.

But if you did do that, then less than 24-hours later had an episode of road rage, got into a Twitter war or unfriended/unfollowed someone on social media or worse, real life, because they shared a thought or opinion you found so offensive you couldn’t bear to have them in your sphere anymore then maybe, just maybe you need a refresher course on Dr. King’s legacy. 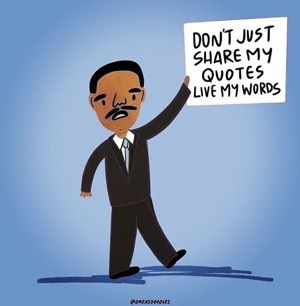 I understand what a rare thing it is to have the fortitude, patience and the grace that he did. I struggle daily with being a fraction of the person he was and display the incredible traits he exemplified. But what if, through the entire month of February we applied a WWDKD (What Would Dr. King Do?) attitude when we are challenged to remember our humanity and recognize it in others?
When someone cuts you off in traffic who is in a different age group or ethnicity….WWDKD?!
When the person holding up the line in the self-checkout lane has no idea what they’re doing and your first instinct is to think: “That’s such a typical [fill in the blank]”... WWDKD?!
When you turn on the television and happen upon a late night talk show or news station that caters to political views that don’t align with yours? WWDKD?!
Hopefully, if any of these or other scenarios that might not have you react as your best-self come up, you can call on that little quiet but powerful voice and ask yourself, “What would Dr. King do at this moment?”

And hopefully just asking that question is enough to give you pause before you choose words of anger, make a snap judgment or disregard someone else’s feelings or irreparably damage a relationship.

INVERSITY™ takes the "division" out of traditional DEI programming by offering a truly INclusive way to communicate, learn, and create an environment vital to an organization's success.

INVERSITY™ accomplishes this mission by creating and supporting brave environments to hold courageous conversations based on intentional language, positive psychology and neuroscience.

* According to 129 studies and a British research group.

3 - Dopamine is linked to motivation and long-term memory: https://www.nature.com/articles/nrn1406

4 - According to 129 studies and a British research group
Copyright © 2023. All rights reserved.
INVERSITYTM is a trademark of Inversity Solutions, LLC
Powered by Limelight Alchemy
Login or sign up to start learning
Start learning
or
Sign up to !
or
click to upload avatar
I accept the Terms & Conditions
I would like to receive news, tips and tricks, and other promotional material
Start your learning journey
Sign in with your account Forgot your password?
Get a brand new password!
OK
cancel
Enter your brand new password
OK
cancel